Me and some friends decided to attend the 2nd Annual Santa Anita Gourmet Food Truck Festival.  Before going, we knew full well what we were getting ourselves into: Disneyland sized lines for a few minutes of gastric pleasure.  The lines did not scare us…we were determined to eat some good truck food!

I have eaten at my fair share of “roach coaches” but I had yet to go gourmet food trucking.  I didn’t quite know what to expect because gourmet means clean…and clean means less flavor.  (As long as I don’t get sick, I don’t mind eating at hole-in-the-wall establishments).

The first truck I hit up was Krazy BBQ, Korean/Mexican fusion, because I was in the mood for some bulgogi.  I wanted to get a bulgogi sandwich but I couldn’t afford to fill up my stomach at the first stop.  Therefore, I got a taco instead.  I was a bit disappointed.  The flavors meshed together too much and became indistinguishable.  All I tasted from the meat was salty.  We quickly moved on. 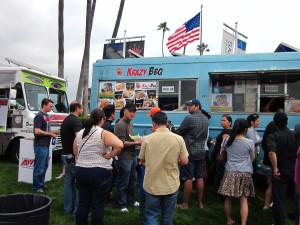 Next, we went to Naan stop, which is Indian fusion.  Again, I was afraid to fill up my stomach too soon so I got a snack-Masala fries.  They took regular shoe string french fries and topped them with a creamy masala sauce.  Beside the fact that the fries were not hot when served, it was very delicious.  The spices were less potent than you would normally expect when eating at an Indian restaurant but the flavors melded together well.  That sauce could have made cardboard taste good.  Thinking about it makes me want to go get some Indian food…  My friends got naan-wiches (sandwich with naan as the bread) and they enjoyed them as well.

After our first two stops, we decided that it was time to get serious; if we were going to taste some food that we really wanted, we were going to have to wait in a 1.5 hr line.  The Lobsta Truck seemed worthy of our time.  Two of our friends decided to be team players and wait in the huge line so that they rest of us could explore other possibilities.  The Boba Truck line was insanely long so we didn’t want to spend our precious time waiting for something we could get any time.  We ended up settling on George’s Greek Cafe.  It was time to spend some of my stomach space so I got a sausage gyro. It was not the traditional gyro- it was McDonaldized; filled with sweet sausage, french fries, feta cheese and smothered in yogurt sauce.  It was good in the ‘I’m American and I eat BigMacs shamelessly’ kind of way.  Would I go back to that truck? Probably not since there are so many other options but it wasn’t bad at all. 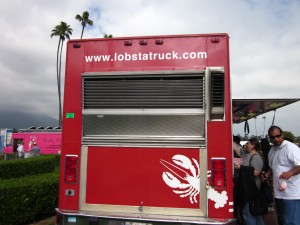 After our encounter with fatty Greek food, we joined our benevolent friends who were in the Lobsta Truck line.    When we got to the order window, the screen slammed shut.  Our hearts stopped…were they out of lobster?! It was like a bad dream.   Fortunately the screen had slammed accidentally and there was still lobster to satisfy our craving.  Three of us ordered lobster sandwiches.  You can get the lobster with butter or with mayo.  We tried both to get the full experience.  The bun is lightly buttered and grilled- heavenly.  The lobster was fresh and soft-even more heavenly.  Before we knew it, our lobster sandwiches were gone.  I even forgot to take a picture of it whole because we were so eager to sample them! 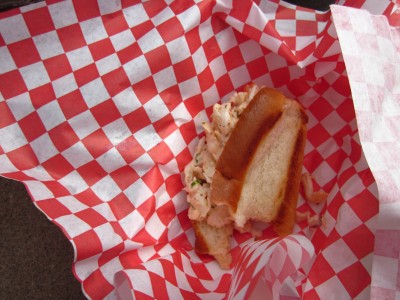 They are on the smaller side so most people eat two.  Since they were $12 each, we only ate one.  We’re fresh out of college. Enough said.  These Lobsta sandwiches are a must try. Creamy, buttery, yet light.

I thought I was done eating after the Lobsta truck but I got dessert just because.  Some of our other friends had been waiting in the Coolhaus line while we were waiting for lobster.  We swooped in to the front of the line with them and contemplated our order.  Their specialty is ice cream sandwiches, with cookie as the outside and an edible wrapper.  Since I had just finished baking my Japan Fundraiser cookies, I was not in the mood for any more cookies.  Therefore, I just got a scoop of ice cream.  My choice: balsamic fig & mascarpone. 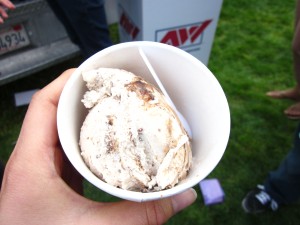 It was fantastic.  The mascarpone was the rich base flavor that contrasted with the balsamic ribbons.  Things like this make me happy that globalization exists.  Grazie, Italy! I’m tempted to say that this was my favorite purchase of the day.  I might try to recreate this so I can eat it whenever I want.

Overall, it was a good day.  Having so many food trucks in one area is exciting but at the same time disappointing- you cannot possibly try them all.  There are a few trucks that I want to try in the future.  Kogi Truck, Grilled Cheese Truck and the Flying Pig Truck.  hmmm….foooood

I am an aspiring nurse who funds my love for food by working a serving job. I love eating, trying new recipes, and watching other enjoy my creations!
View all posts by hmmfood →
This entry was posted in desserts, Food Truck, Fusion, Greek, Ice Cream, Indian, Korean, lobster, Mexican, sweets, thoughts. Bookmark the permalink.